While staying at home I got a bit crazy and decided to revisit one of the early MSTW plugins, Coaching Staffs. Although I was a bit chagrined by what I didn’t know about WordPress then, it’s actually a pretty cool plugin. It’s aimed at high school coaching staffs, where the same coach had different roles on different teams, e.g, Varsity defensive coordinator and JV head coach.

Anyway, the new release makes it much simpler and cleaner to customize the front end displays with custom CSS stylesheets. It also makes the use and deployment of the single coach profile/bio page and the coaching staff gallery page easier and more flexible.

So if you want to recognize your coaching staffs on your site, version 1.4 will be available soon on WordPress.org. But you can check it out right now on dev.shoalsummitsolutions.com. 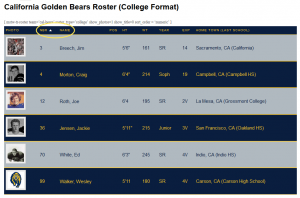 I hope this note finds you all well during these trying times. I’ve been writing a little code while sheltering in place without spring sports, and MSTW Team Rosters release 4.2 will soon be available on wordpress.org and on your Installed Plugins admin screen. The primary upgrade is a long-requested feature – the capabilty to sort roster tables by number and name in the same way tables can be sorted by column on WordPress admin screens, e.g, All Posts or Team Rosters -> Manage Players. You can try it out on dev.shoalsummitsolutions.com. 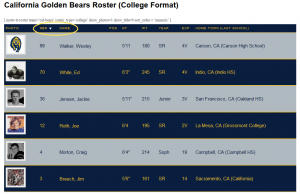 Given that I’ll be holed up a bit longer, upcoming improvements include additional enhancements to the front end displays [shortcodes], improved integration with the MSTW League Manager plugin’s features, and the ability to manage team rosters by year. If any of you have requests for Team Rosters features please send them to me as soon as possible.

I believe version 2.7 of League Manager is fixed and posted in the wordpress.org plugin repository. I did not change the version number, so you will not get a notice on your plugins page that it’s been updated. If you have previously installed it, deactivate it, delete it, and add it again. You can search for ‘MSTW League Manager’ on your site admin plugin screen, and it should pop right up.

I hope this is that last post on this subject, but if you encounter any other issues, please let me know and I will address it ASAP. But hopefully you won’t have to hear from me again until tournaments (MSTW Bracket Builder) are updated, and tournament games can be displayed in the League Manager schedules.

BTW, some of you have asked, and yes, the format for the [mstw_league_schedule_table] shortcode did change to better accommodate ‘meets’ in that schedule table. You will only see this if you are using the extensions in the MSTW League Manager Add-ons plugin.

Users have alerted me to the following problems with MSTW League Manager 2.7. If you haven’t installed it yet, WAIT a bit while we sort things out. I’m confident there are not significant issues, just some mistakes, but before I get to the specifics of the 2.7 builds, here are a couple of general pointers:

As for the specifics:

I apologize for any inconvenience caused to plugin admin/users, and want to thank those who have helped me sort this out.

Also in version 2.7 an “All Sports” sport concept intended for sites with a large number of teams, sometimes the high schools in an entire state. Watch more about All Sports:

“Local” sites generally track a manageable set of local leagues and teams – schedules, league standings, team rosters, highlights, and so forth. However they must manage a large set of teams on the site for non-league games and state playoff games against local teams. These sites don’t store any information about these non-local teams other than including them on local team schedules, tournament brackets, and meets. In particular, the site has no interest in tracking these teams’ leagues.

But here’s the problem: when creating a non-league game, all teams playing league’s sport so up in the drop-down list of teams for the game. But leagues, not teams, are attached to sports. So admins would create a “generic” league for a sport, and put teams in it. This works, but a non-local school may compete against local schools in many sports, and they have to be added to a “generic” league for each sport. This becomes a significant maintenance burden for literally hundreds of ‘non-league’ teams.

A number of minor bug fixes and JavaScript upgrades are also included.

MSTW League Manager update should come up on your admin Dashboard -> Plugins. If you have purchased the add-ons, you should be able to access the update using the same link you received originally. If not, just let me know.

This release corrects a long standing (or dormant?) bug that caused the Settings to not be saved correctly. It also removes a couple of annoying PHP Warnings and Notices.

MSTW League Manager update should come up on your admin Dashboard -> Plugins. If you have purchased the add-ons, you should be able to access the update using the same link you received originally. If not, just let me know.

Happy Holidays to all and thank you for your support in 2018! A number of MSTW plugin releases with lots of cool new features, not to mention 1 or 2 bug fixes, are looming in 2019:

o New releases of MSTW League Manager and League Manager Add-ons are coming very soon. They contain a number of new shortcodes, some back-end admin features, and some enhancements to better support those of you building sites on the MSTW plugin framework.

o More features for League Manager on both the front and back ends are in development and test. Expect to them this spring. (Sorry, no hints! But if there’s something you would really like to see, let me know now.)

o A minor build of Team Rosters is coming soon. In addition to a number of “maintenance items”, it will include a new shortcode for a player gallery view of a table of player photos.

o A major build of Team Rosters is planned for later this year. In fact, it will probably be an entirely new plugin in order to clean up a number of issues. It will update the plugin’s database structures so that rosters will work seamlessly with the League Manager teams. The plan is to migrate existing rosters – teams and players – to the new structure automagically.

MSTW Bracket Builder Premium version 1.2 has been released. A couple of rather large bugs have been corrected, a number of small ‘issues’ have been cleaned up, and the documentation, including the FAQ and Quick Start pages, has been updated, as well as a couple of new video Tutorials – Common Problems and Create Teams. If you have trouble downloading the latest version from this site using the link you received at purchase, please contact me and we’ll get it squared away.

NOTE: You should deactivate and delete version 1.1 before installing version 1.2. Any tournaments you have created with version 1.1 will be available in version 1.2, despite the warning about about “deleting the plugin and all its data”.