Despite a VERY hectic summer, progress is being made on the next release of Game Schedules. The following status summary is provided to encourage current MSTW users to chime in with their “would really like to haves”. I have created a new thread on the Game Schedule forum for Gold Support members to share their ideas. All others are welcome to send me an email (mark@drmarkodonnell.com) and I will post their ideas to the forum (the good ones anyway 🙂 ) Now is the time …

Game Schedules will be deprecated (read: no longer supported). It will be replaced by a new MSTW Schedules & Scoreboards plugin. You can think of it as Game Schedules 5.0, but it needs a new name due to constraints within the wordpress.org plugin support structure.

At this point, the backend Admin Screens in the WP Dashboard are in test. Some pictures follow below. 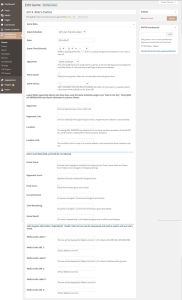 After considerable hemming and hawing, pro and conning, Game Locations is also being deprecated. It’s functionality (plus some new stuff) will be included in the new MSTW Schedules & Scoreboards. So rather than having to load a separate plugin to use the full features of game schedules, game “venues” will be built in.

Some of the ‘deepest’ changes were in support of data export/import to/from CSV files. As some of you have discovered, you cannot import related games, schedules, teams, and locations and have everything link together properly. This sucks for admins with large sites with lots of teams, games, etc. Not only will this be fixed going forward, but it will be fixed in such a way that you can export your existing data to CSV files and import it into the new data tables. (I just heard a big “Yeah!” from Jay!) 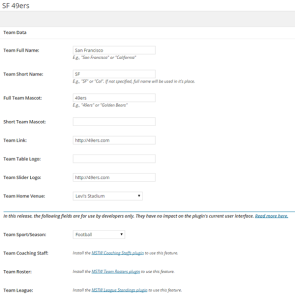 of MSTW League Standings and Team Rosters, and Coaching Staffs plugins is coming. Eventually there will be only one Teams DB, which will allow rosters and coaching staffs to be linked to teams, and teams to be assigned to leagues. The various displays can also be updated to use other team data such as logos. The necessary hooks are in the admin screens. They don’t provide any functionality yet, beyond what a skilled theme developer could do with them, but they are available for the next builds of Team Rosters, Coaching Staffs, and League Standings. 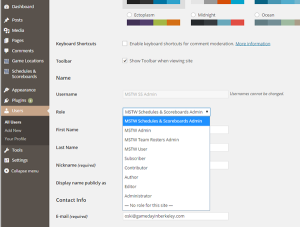 Here’s what a “schedules and scoreboards admin might see. When they log in they see their profile page and the Schedules & Scoreboard menu item. Note that I have not removed access to the dashboard or allowed access to other WP menus. I decided to leave that to each site admin based on their site use cases. I also don’t try to control what other plugins are available to users. (Not my job!)

Finally, a subscriber would only see their profile and whatever else you choose to give them, but nothing related to MSTW plugins. 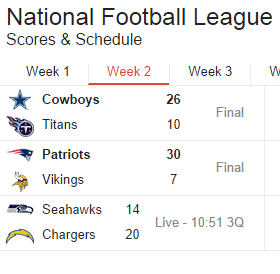 The biggest front end change will be the introduction of a scoreboard feature, which will provide a means to display the results of completed games. (There will be others, like CSV export.) It seems that as many users are using game schedules for completed games as are using the plugin for future games. The new scoreboards will look something like the scoreboard on the left. The Seahawks Chargers game (Go Bolts!!) shows what “Live Game Updates” might look like in the future. But that’s a story for another post!