Thanks to ‘dvkob’ for the great CSVImporter plugin, which I simplified for this specific use. I also include and use the File_CSV_Datasource class by Kazuyoshi Tlacaelel exactly as it was found in the CSV Importer plugin. All their GNU/MIT copyrights are passed through.

Team rosters can be loaded from files in CSV format. This allows admins to load their team roster(s) from an Excel spreadsheet, which is often used to create printed rosters. With the release of version 4.0, the CSV export/import process also translates v 3.1.2 data structures to the much richer version 4.0 structures. So the CSV Import Rosters admin screen (shown below) can be used to bulk import rosters created in Excel for printed rosters, and it can be used to move sites within or across WordPress installations. Sample CSV files may be downloaded from the CSV Sample Files man page. If you are importing bulk rosters that you created, I recommend you first successfully import the samples provided, then modify them for your own needs. The remainder of this page explains the controls on the CSV Roster Import admin screen. For details on the CSV file formats, see the CSV File Formats man page. 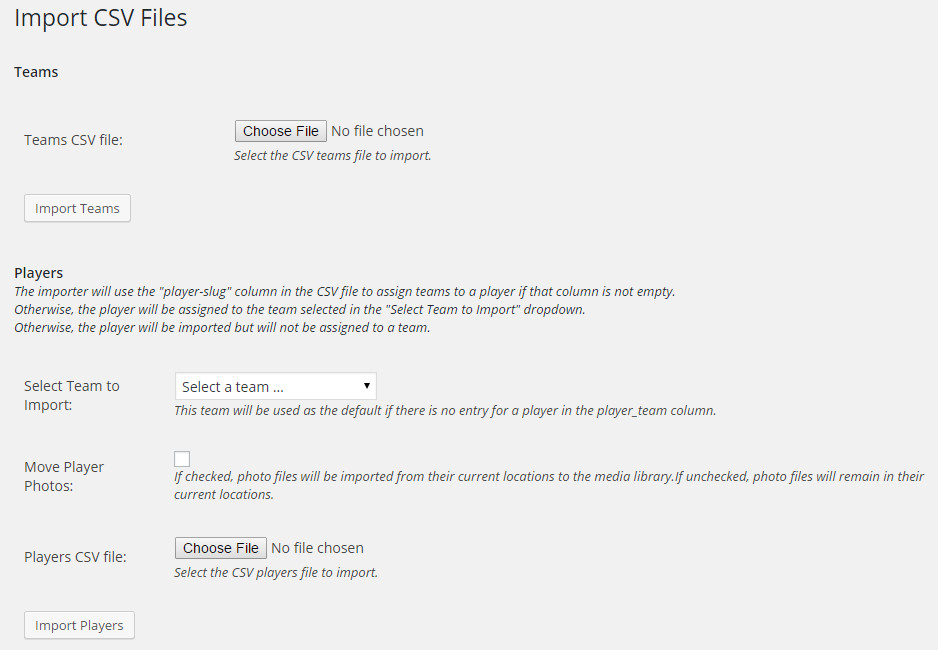 Import Teams. Press to import the teams in the selected CSV file. NOTE: teams that already exist in the DB will be ignored.

Select Team to Import. Use this control to select an existing team in the Teams DB. This control should be used if the CSV file does not contain a player_teams column; for example, when the players on one team are being bulk imported from a CSV file. When a CSV file is created by the MSTW CSV Exporter plugin, the player_teams column will contain entries, so any team selected in this control will be ignored. See Notes & Discussion below for more info.

Move Player Photos. If this checkbox is checked, the plugin will attempt to copy the player photo files specified in the player_photo column from their existing location to the sites media gallery. So this checkbox should be UNCHECKED for a simple site update where the existing player photos do not need to be moved, and CHECKED when a site is being moved to a different WordPress site.

Import Players. Press to import the players in the selected CSV file. Note: unlike teams, duplicate players WILL be imported.